My mom called today and wanted to make a trip to Gardner’s, our favorite used bookstore here in Tulsa. She and I go there once a month or so to browse and trade books—to the point where we once had enough trade credit that we got used to medium-strength exclamations of employee shock when they pulled up our account page. Was wandering around in there today, picking out some books, and I started thinking about why I like used bookstores so much.

Because, let’s face it, even factoring in my trade credit I could get some of the books I buy at Gardner’s for basically the same price on the internet. Probably 50% of the books that I have on my “Look For” list I could find used on Amazon for a dollar or two. I could do all that shopping in one place without leaving my house and have the all books that I am looking for right now for basically the same price.

But I don’t. And I think it’s because finding them at a bookstore, or finally getting them from my wish list on Paperbackswap, feels like unearthing a treasure. I get that special little ping of excitement from finding something that I’ve been wanting, that I’ve been looking for. (A related ping of excitement is the reason that I subscribe to magazines instead of just getting them digitally: I like coming home to fun mail.) And then there’s the feeling of “rescuing” a good book, which I also get. (Though let’s not talk about the slightly sad feeling I that comes from leaving a good book that I already own at the store . . .)

Do other book lovers feel this way? I don’t know. But that’s the random bit of self-examination I did today.

Excited about my haul, though. I got The Rainbow Goblins and The Secret Kitten for my niece, and Charles DeLint’s Waifs and Strays for me. I absolutely loved The Rainbow Goblins as a kid—Mom had an oversized edition that she got out for special occasions—and I had completely forgotten about The Secret Kitten. (Think it was one of the books that got water on it while being stored in the garage and was ruined. Still trying to re-find all the books that had to be thrown out that way, which is made difficult by the fact that I can’t remember some of them until I actually see them, like this one. . . ) 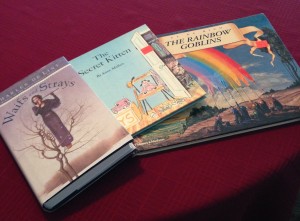 So, yeah, while I like the convenience of being able to go online and buy pretty much any book I want whenever (and that would have been so nice as a pre-teen when I was searching for Tamora Pierce’s final Song of the Lionness book while it was out of print, with no internet!!!), I don’t think I’m ever going to give up that little ping of pleasure that comes from the random finds of the used bookstore.

New Book Coming Out, or I Finally Get to Tell Everyone!

So I’ve been sitting on some exciting news for a while, and today’s the day I finally get to share it. I’m super excited and kind of nervous and so I’m just going spill it quickly.

I have a new book coming out!

*flops over in excitement*

Charmed Deception will be published by Egmont USA on October 27th, 2015. Here’s the cover copy:

Sable Wildcross, the sixteen-year-old daughter of a powerful wizard, chafes against the restrictions that keep a highborn lady in her place, limiting her life to one of tea parties and balls. She wants more, but she hardly even knows what more means in her country, where women are not allowed to use magic on pain of imprisonment or death. The only real problem Sable has ever faced is her health: to protect her weak heart she must never remove a necklace her father has charmed to protect her.

Late one night, Sable sees a ghostly figure—a beautiful, transparent girl her own age. Who is this girl—what is this girl? And how can she know something about Sable that Sable herself does not even know—news that will change everything Sable has been raised to believe about herself and her world?

Charmed Deception is a new YA fantasy novel in a new world, and contains scenes of

I’m really, really excited about this new book and these new characters. I’ll be posting more information about Charmed Deception, teasers from the book, and info about ARC giveaways in the months until publication, both here and on my Tumblr and Twitter, so keep checking back!

I’ve been thinking lately about the differences between YA books and adult books. (Or, I should say, some of the differences between some YA books and some adult books, because making blanket statements about all types of books in a particular genre doesn’t lead anywhere good.) In any case, I just finished rereading Robin Hobb’s Royal Assassin, the second book in her Farseer trilogy, which is the first of two finished trilogies and one just-begun trilogy about the same characters. They’re great books, ones I’ve loved for years; I’m rereading them right now because the first book in the new trilogy just came out and I’m one of those people who rereads all the previously books whenever the new book in a series comes out. (Yes, I reread the Harry Potter books seven times. I fear the next Game of Thrones book coming out.)

As I was reading Royal Assassin, thought, I started noticing the vast difference in pacing between it and the book I had read previous to it: Blood of My Blood, Barry Lyga’s just released ending to the I Hunt Killers trilogy (also an awesome set of books, but don’t read them while you’re home alone if you’re twitchy like me, as they are about serial killers). Blood of My Blood is a really fast paced novel; I read the whole thing in less than 48 hours, because it just keeps pulling you along, with the events happening over the course of only a few days. Royal Assassin, on the other hand, is much more leisurely paced; it takes a lot longer for the character and plot threads to unfold, the tension to ratchet up, etc.

Going from Blood of my Blood to Royal Assassin was actually a little jarring as a reader—I had to mentally slow myself down for Royal Assassin. And while Blood of My Blood is on the fast end of YA to begin with, it got me trying to think of YA books that are on the other side of pacing, books with longer fuses, as it were. One of the reasons I’m interested in it is that I think my own writing style tends to be a little slower paced than the average YA novel. I don’t mind that—it’s usually what my particular style of books need. (Though after my first draft I often have to do a rewrite with picking up the pace in mind, because my first drafts tend to come out a bit slower than necessary.)

What’s the advantage of slower pacing? It depends, but I enjoy the sometimes deeper sense of place you often find in more deliberately paced books, the ability to really sink into a fantasy world and its culture and myths. Often a deliberate pace means the book is going to take place over a longer internal time span—months or years rather than days or weeks—again, something that I enjoy and that I tend to gravitate toward in my own writing (though I would love to write a book that takes place over 24 or 48 hours just to see if I could do it well.) I also like books that, as my husband says, are Animal Crossing books (in reference to the Nintendo game). Books where it’s not life or death every moment, but that take time to show the characters just living life—going to the post office, having tea, picking out Christmas presents.

Am I saying that one type of book is better than the other? Not at all. Just like sometimes you want soda and sometimes you want tea, we need different book fixes for different moods. But because so many YA books are very quickly paced, I think it’s nice to also highlight the other side of YA.

So here are a few YA books for when you feel like something that takes its time a little more than most:

Juniper, Gentian and Rosemary by Pamela Dean (on the border of YA and not—I’ve seen them shelved both ways, as I have with several McKinley books)

The Dark Is Rising series by Susan Cooper

The Safe-Keeper’s Secret and subsequent books by Sharon Shinn