Earlier this week, as I was walking to my building at work, I found this little guy on the sidewalk. 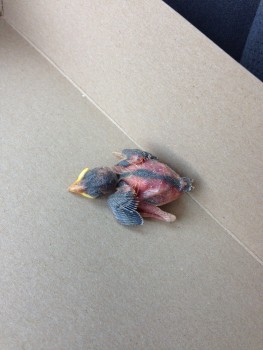 At first I thought that he was dead, but then he moved. I looked around for a nest/parents, but that particular stretch of sidewalk is pretty big, with the nearest trees a good ways off for a tiny thing like him. I could see part of a nest wedged on the stones of the side of building (TU is mainly built with sandstone that is really useful for birds, apparently, because there are nests in lots of crannies) and hear some birds, but I had no way of getting him back into it. Or, honestly, any idea of how he could have gotten out of it and then gotten to where he was, since the nest I was looking at was over a long drop down the stair well to the basement floor of my building.

It was really hot, and I didn’t want to leave him to fry on the sidewalk, so a co-worker and I picked him up with some paper towels and brought him inside. Where we then put him in an envelope box lid, because that’s what you have to use as an emergency bird transportation unit at a literary journal’s office. Called around, found a place that would take him, and delivered him over lunch. Sadly, they was quite busy, so I didn’t get to ask if anyone knew what kind of bird he was (if they could even tell at that age). I think he looks like a robin, with that yellow beak and his wing color, but I don’t know anything about birds and have literally no other basis for that idea, so I could be completely off base.

He was very small, but seemed strong from all his cheeping and scuttling/squirming around. I hope that he makes it.