My family is very holiday oriented. Christmas is an extravaganza of decorations (I can tell you the story behind practically every ornament on my tree). Halloween featured huge parties thrown by my parents when I was a kid (I base my idea of what makes a great party on these) and still requires costumes for everyone and multiple pieces of candy to be given out to every trick-or-treater. Exactly what’s served at Thanksgiving might change a little, but the particular table decorations we’ve been using for 35 years are a must. We like our holidays.

Our actual 4th of July plans may change from year to year, but the one thing that doesn’t change is that we have to make homemade ice cream. This is a tradition started by my mother’s family long before I was born, and the only time we have missed it is when my mom was in the hospital last year on the 4th (and we just waited a week and made it then).  The most traditional of our traditional ice cream flavors and my favorite is peppermint, but we have also been known to make peach, blackberry, and cinnamon. For years we hand-cranked it, taking turns when someone’s arm got tired. About two years ago we switched to an electric mixer, though one that functions exactly the same as the hand-cranked kinds—with the ice and the rock salt and the tall metal canister. I have some guilt over that, but we did Very Scientific Taste Testing Comparisons and determined the machine-cranked was 95% percent as good as the hand-cranked, but with 100% less feeling that your arm is about to fall off. So now we do that.

This year, there was Much Discussion about the flavor of ice cream to make. We wanted to try something new, and one of the flavors that my mom and I kept seeing mentioned in cooking magazines and ice cream books and even our local paper was corn. Corn flavored ice cream.

My initial response was “Ew.” But literally every time it was mentioned, it was prefaced with something along the lines of, “Our team of chefs thought this sounded weird and possibly gross, but we were totally wrong and it will change your world with one bite!!!!” So we figured that we, too, would be initially hesitant but soon ready to sing the praises of corn ice cream.

Turns out, not so much.

I think we followed the recipe properly. We chopped off the corn kernels and mixed them with the cream and milk . . . 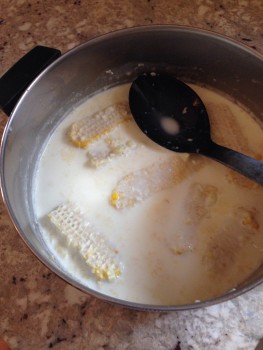 . . . Eventually pureed said kernels and squeezed out all the corny custard goodness from the mix . . . 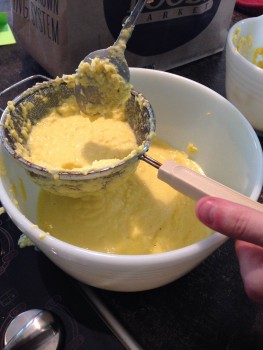 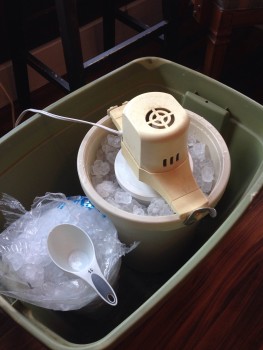 . . . And it did make ice cream. Ice cream that tasted very much like corn. We even made the recommended blackberry sauce to go with it. 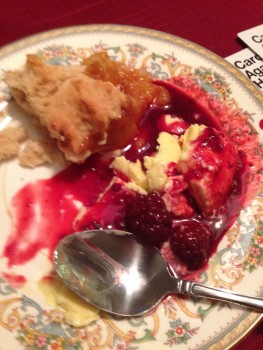 But sadly, I have to go on record as saying that I think corn and ice cream just don’t mix. It’s not that it tasted completely gross or anything, but it didn’t taste good either. It was mostly just . . . really corny. Which is, apparently, something my palette does not appreciate in ice cream. (Luckily, a friend brought peach cobbler to our cookout as well, and that was quite good, so we were not entirely dessert-less.)

So my 4th of July culinary adventures ended with a bit of a whimper. But it could have been worse. This morning my mom called to tell me about a recipe in a magazine we had picked up at the grocery store while buying the ingredients for the corn ice cream. The flavor we could have tried, for which there is an actual, honest to God recipe out there in the world?